Medicago truncatula or barrel medic is native to the Mediterranean. It is a member of the legume family of flowering plants. More famous members of the family include pea, soybean, beans, peanuts and clover. It is grown as a forage crop (grown to be eaten by livestock) in Australia and has become a “model” species to study legumes. From a research perspective using  M. truncatula has the advantages that it is relatively small, has a short life cycle (3-4 months seed-to-seed) and can be transformed (have genes inserted into it). M. truncatula is the first legume to have its genome sequenced (1), providing a valuable tool for studying it and other legumes. 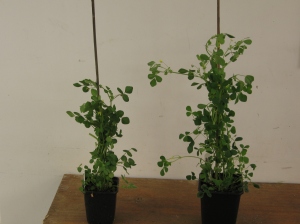 The legume family is able to form a symbiosis, a mutually beneficial relationship with soil-living bacteria called rhizobia. The rhizobia are able to fix nitrogen gas from the atmosphere into ammonia, a form of nitrogen that plants can take up and use. Nitrogen is an essential plant nutrient and is in relatively short supply in the soil giving legumes an advantage over their non-legume competitors. In return for gaining a source of nitrogen the legume develops special organs on its roots called to house the rhizobia, providing sugars and a low oxygen environment to maximise nitrogen fixation. 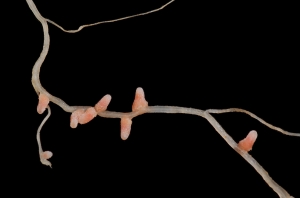 Nodules on Medicago truncatula root. The pink colour is due to the presence of leghaemoglobin and indicates the nodules are fixing nitrogen. Photograph by Ninjatacoshell distributed under a CC BY-SA 3.0 licence.

Hundreds of years ago it was recognised that growing legumes could increase the fertility of soil. They were often included in crop rotations, a traditional agricultural practice where crops were grown on different fields each year in a cycle instead of growing the same crops in the same fields year after year. Today, agriculture often relies on the use of nitrogen fertilizers (e.g. manure, peat, ammonia) to replenish soil nitrogen.

There is a lot of interest in understanding how symbioses between legumes and rhizobia are established. Often in agricultural conditions the efficiency of nitrogen fixation in the legume can be sub-optimal so research could help scientists improve this by selective breeding of legume crops and development of more favourable agricultural practices. There is also the hope that in the future it may be possible to genetically engineer crop plants such as rice, wheat and maize to be able to form the symbiosis, thus reducing the need for nitrogen fertilizers.