When you picture a forest of bamboo, the last place you might think to find it is in the southeastern United States. Although the majority of bamboo species are found in Asia, River cane (Arundinaria gigantea) is the only* species of bamboo native to the United States. During my master’s degree research at the University of Georgia, I studied the propagation and genetics of this species, so I’m more than a little enamored with River cane. 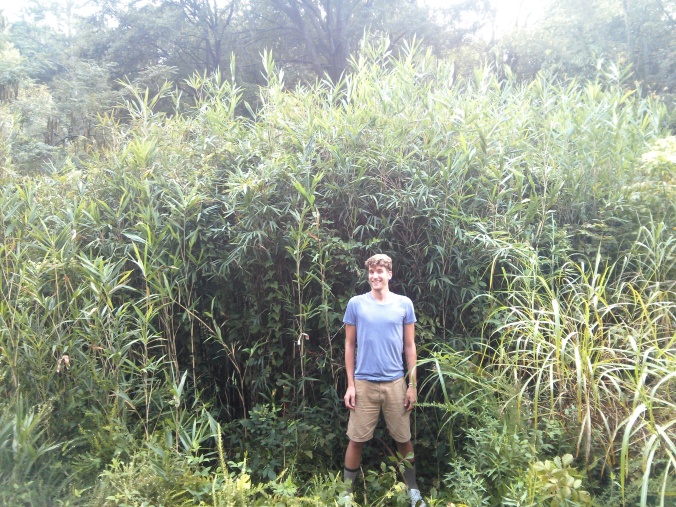 Alex by a small canebrake of River cane in Athens, Georgia

As the name suggests, River cane likes to hang out along riverbanks and streams, where it can form very large and very dense bamboo forests called ‘canebrakes’. When Europeans first surveyed North America, they often found these dense canebrakes running for several kilometers along rivers. Ecologically, these canebrakes are very important. Canebrakes have dense roots that make them very effective at controlling erosion, and they also work to absorb nitrogen fertilizer runoff before it can enter and pollute streams. There is also some evidence that canebrakes form a unique habitat for many birds and insects.1

Beyond its ecological value, River cane is botanically fascinating! Unlike many other plants, River cane takes an extremely long time to flower. Some observations suggest 30-40 years between flowerings. When River cane does flower though, it does it with style. Often the entire canebrake will flower simultaneously, produce hundreds of thousands of seeds, and then die off. The seeds look like green rice, but unlike rice, they must germinate immediately or die. After the flowering, birds consume many of the seeds, but the sheer number of seeds ensures that enough will germinate and restore the canebrake.

What exactly triggers the plants to flower after decades of growth is not yet clear, but researchers do have some insights into how the plants coordinate their flowering en masse. Each seed that germinates not only grows a leafy aboveground shoot but also many underground stems called rhizomes. These rhizomes spread out and send up new shoots along their length. This means that many (or even most2) of the shoots in a canebrake are from one individual plant. Additionally, all the seeds produced by a flowering event are the same age and are closely related. This combination of having very a few dominant individuals, who are related and of similar age makes flowering together easier, though no less interesting.

Of course it can’t be all milk and honey, River cane is critically endangered, though not yet federally protected in the US. Many scientists and private citizens are currently rising to the challenge by working to increase awareness, promote ornamental use of River cane, and enact conservation of canebrakes.

*The exact number of US bamboo species is (surprisingly) hotly debated, and numbers between one and three depending on how you define a species. River cane is almost always the primary species in the genus, but Hill cane (Arundinaria appalachiana) and Switch cane (Arundinaria tecta) are commonly mentioned.3

About the author: Alex Rajewski is a recent transplant to the University of California, Riverside, where he is pursuing his PhD. His current research focuses on the evolutionary and genetic forces that created fleshy fruits in the nightshade family. Follow him on twitter: @Rajewski.