Water from the river Avon flooding a field in front of Sopley Mill (Jan 2014). Photo by Mike Searle (CC BY-SA 2.0) via geograph.org.uk.

This winter has been an unusually stormy and wet one for the UK with rainfall for the December-January period being the highest since records began (1). The ground is saturated, and water levels in rivers and lakes have risen leading to flooding in several areas including the Somerset Levels and along the River Thames. Parts of the Somerset Levels have been continuously underwater since December, causing much disruption to the people who live there. But how does flooding affect plants?

The answer is that it depends. Some plants are perfectly happy growing in wet places e.g. bulrushes or water lilies, and are adapted to do so. However, in generally drier areas such as fields or pastures, the presence of excessive amounts of water can cause the plants to become stressed and even die.

There are many ways that flooding can damage plants. Excessive moisture in soil decreases oxygen levels. This impedes respiration (where energy is released from sugars) in the roots leading to the build-up of carbon dioxide, methane and nitrogen gases. Ultimately, the roots can suffocate and die. Toxic compounds such as ethanol and hydrogen sulphide can also build up in the soil and damage plants. If leaves and stems are submerged, photosynthesis (absorption of energy from the sun to produce sugars) can be inhibited and plant growth can slow or even stop.

Plants that are suffering from excessive-water stress are more prone to infection by disease-causing organisms such as fungi or insects. Also, excessively wet soil tends to favour the growth of soil-microbes such as Fusarium spp., Phytophora spp. and Rhizoctonia solani, which can infect plant roots leading to diseases such as root and crown rot. 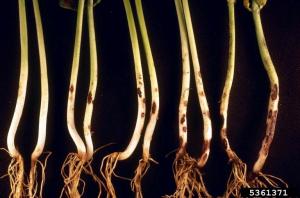 The deposition of soil and rocks onto plants during flooding can damage plants, as can the exposure of roots to the air by the washing away of surrounding soil. Also, even after the flood waters recede the damaged plants can be more vulnerable to other stresses. For example, trees with substantial root damage are more likely to be uprooted in windy weather.

The damage caused to plants by flooding differs depending on the time of the year and the age of the plants. During winter most trees and shrubs are not actively growing and so they are more tolerant to flooding. Established healthy plants are generally more tolerant than young or very old plants. The longer that excessive water is present the more likely that damage to plants will be fatal. Even once the flood waters recede it can take weeks for the soil to dry out with plants continuing to suffer damage in the meantime.  It can take weeks or months for plants to die after being damaged so it will be a while before the full impact of the UK’s wet winter on our plants becomes clear.

1) Met Office: a global perspective on the recent storms and floods in the UK (retrieved 20/02/14). http://www.metoffice.gov.uk/research/news/2014/uk-storms-and-floods

2)University of Wisconsin – Extension: The Effects of Flooding on Plants and Woody Plants (retrieved 20/02/14). http://www.uwex.edu/ces/ag/issues/effectsoffloodingonplants.html

3) Plant Stress: The impact on flooding stress on plants and crops (retrieved 20/02/14) http://www.plantstress.com/articles/waterlogging_i/waterlog_i.htm

6 thoughts on “How flooding affects plants”